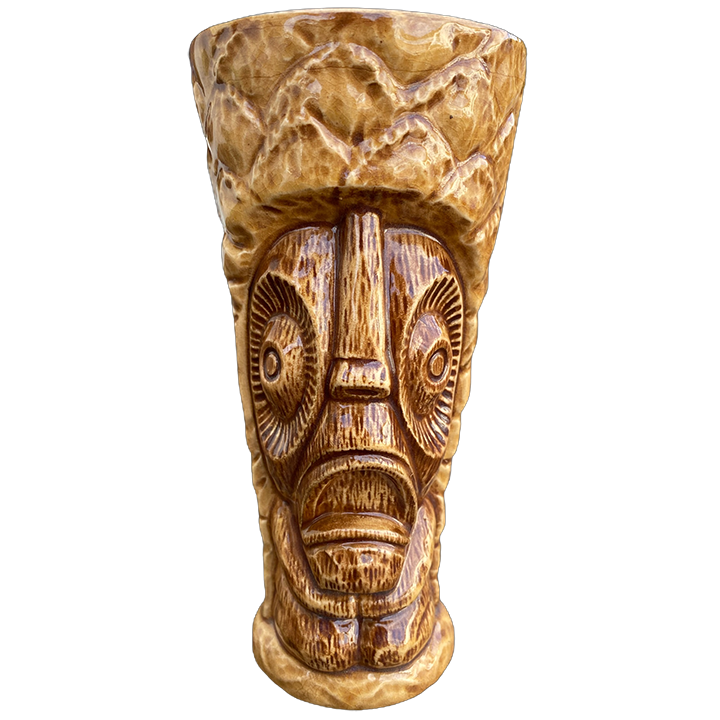 Bumatay is an icon of modern day ceramic Tiki mug making. Its design is based on a wood carving by a man of the same name, Andreas Bumatay. Andreas carved hundred of Tikis, most of which found homes scattered across the American landscape of pop-up Tiki bars. Among those Tikis were several in the Bumatay style, so it is not known where the first Bumatay currently resides, or if history has been kind to it. Complicating the Bumatay’s history is Richard Ellis, the protégé of Andreas Bumatay, who also carved Tikis in the Bumatay style.

The Bumatay mug depicts a kneeling Tiki with a recessed face and a pained expression. It has large, radiating, oval eyes, and a groaning mouth. The exterior pattern on Bumatay resembles a pineapple texture.

Some of the first Bumatay Tiki mugs were sold at Hoe King Lo. Those mugs have concave bottoms and are marked “Hoe King Lo”. Around the same time, some Bumatay mugs were marked “Hala Kajiki” for a tavern-turned-Tiki bar in Illinois. Johnson Products also sold Bumatay mugs in a set of Tiki bar accessories that were labeled “JPCo”. Several editions of the mug were produced, but most all of them feature a tan and brown gloss glaze.

These ceramic cocktail mugs are related to the Bumatay Tiki: