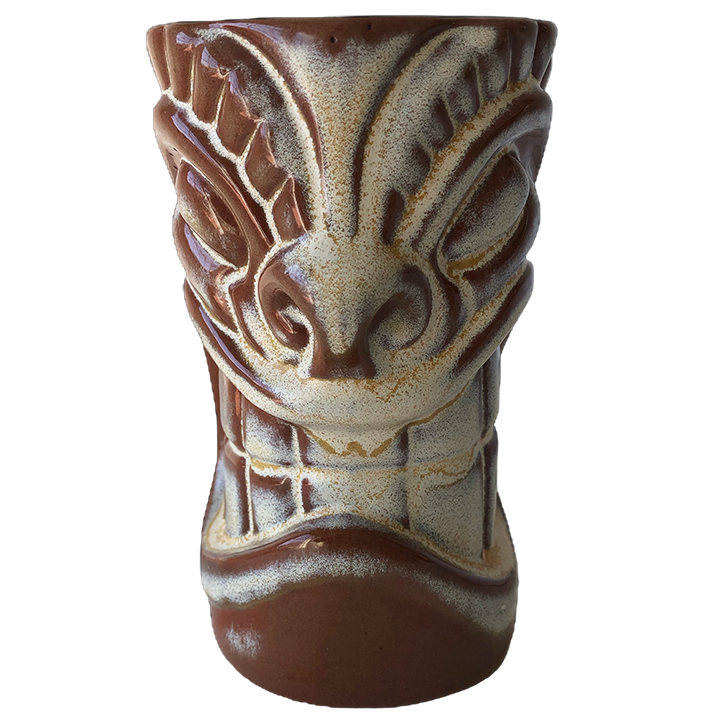 Frank Norman’s daughter, Joniece Frank, was a designer for Frankoma Pottery in 1960 when she designed a ceramic piece designated the T3, also known as the Frankoma War God. The mug depicted an angry Tiki with gritted teeth, flared nostrils, and an imperfect rim resembling pinched pottery. The T3 mug was designed for the Club Trade Winds Restaurant located in Tulsa, Oklahoma. The restaurant was originally intended to be the ultimate Polynesian style restaurant, surpassing the then-popular Trader Vic restaurants.

For patrons, the Frankoma War God mug was a souvenir included in the price of a cocktail. It was intentionally designed large so that Club Trade Winds could charge high prices for cocktails that were mostly made with ice. However, despite its warm reception, the mug was quickly abandoned due to reoccurring theft by patrons. The cost per piece was too great to justify, and subsequent orders by the restaurant were very small.

In 1967, Frankoma Pottery introduced a smaller version of their Frankoma War God called the T3S. The smaller War God stood 6″ tall and was 3¼” at its widest point. It was made of red clay with a brown satin glaze and white highlights. The mug could be purchased through their catalog for $1.50 a piece.

Several years later, Joniece made around 25 of the old Club Trade Winds items for a new after-hours club named The Cultured Pearl. The restaurant closed shortly after opening, and so Frankoma War God’s marked “Cultured Pearl” on the bottom are perhaps the rarest.

Frankoma War God mugs have come in several different colors over the years, including mossy green and red flame glazes. Several artists have since tried to recreate the mugs in their own studios, including Gecko from South Sea Arts. Regardless of their color, most all Frankoma War God’s are highly sought after mugs of significant value.

These ceramic cocktail mugs are related to the Frankoma War God: