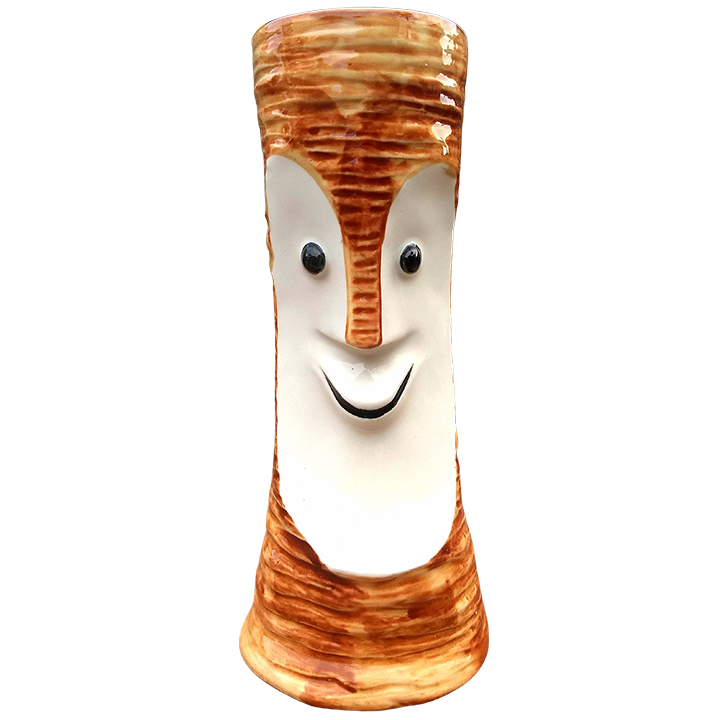 Tiki Bob is an easily recognizable and enduring cultural icon. Its simplistic design, two dots and a curved line, contributes to its position as one of the most frequently imitated designs in modern mug making. While most well-known Tikis were appropriated from Polynesian culture, Tiki Bob was born in 1955 in the heart of San Francisco.

The mug was born from a restaurant of the same name, the original Tiki Bob’s. Bar manager Bob Bryant opened the restaurant after he left Trader Vic’s, which was located just a few blocks away. Bob’s bar took on a modernist aesthetic and its icon, designed by Alec Yuill-Thornton, was no different. Tiki Bob is a product of its era.

While the original Tiki Bob’s restaurant closed decades ago, its logo is still present at the corner of Post & Taylor in San Francisco.

The original Tiki Bob cocktail mug depicts a face cut into a palm trunk, in a classic fogcutter shape. It resembles a barn owl and is lighter in color than the Tiki Bobs released at other locations. Sven Kirsten, author of the Book of Tiki, described the mug as “part George Jetson, part modern primitive.” On the lower side of Tiki Bob is a white oval bordered by a yellow lei, with the words, “Tiki Bob’s, San Francisco”. The bottom is unmarked, though some may have the original Otagiri sticker. Later editions featured darker glazes, different bar names, and markings on the bottom of Tiki Bob.

These ceramic cocktail mugs are related to the original Tiki Bob: