Henrik and Denise Van Ryzin have released a new episode of their popular Tiki Technical Tuesday series on YouTube! This week’s episode features a return to Mysterious Island and it reveals a new mug that pays homage to one of VanTiki’s first mugs.

The first slipcast mug by VanTiki, the Giant Crab Claw, was released several years ago. It was an extremely limited mug and less than forty were made available to the public. Now Henrik is sculpting a new Giant Crab Claw mug that will be more accessible than its predecessor and it has an entirely new sculpt!

For more information on the upcoming mug and to learn more about the mug making process, watch VanTiki’s latest video on YouTube. You can also follow VanTiki on Instagram for future release information. 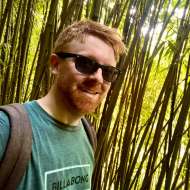 Gabe got bit by the tiki bug while visiting Trader Sam's in Anaheim, CA. He founded The Search for Tiki LLC and built this website, despite the best efforts of his two cats.
All Posts »
PrevPreviousJungle Modern Ceramics To Release A Fresh Batch Of Coconut Mugs Tonight In Varying Colors
NextMug Inspired By Eli Hedley’s Trader Mort Tiki Coming To Tiki Tom’sNext