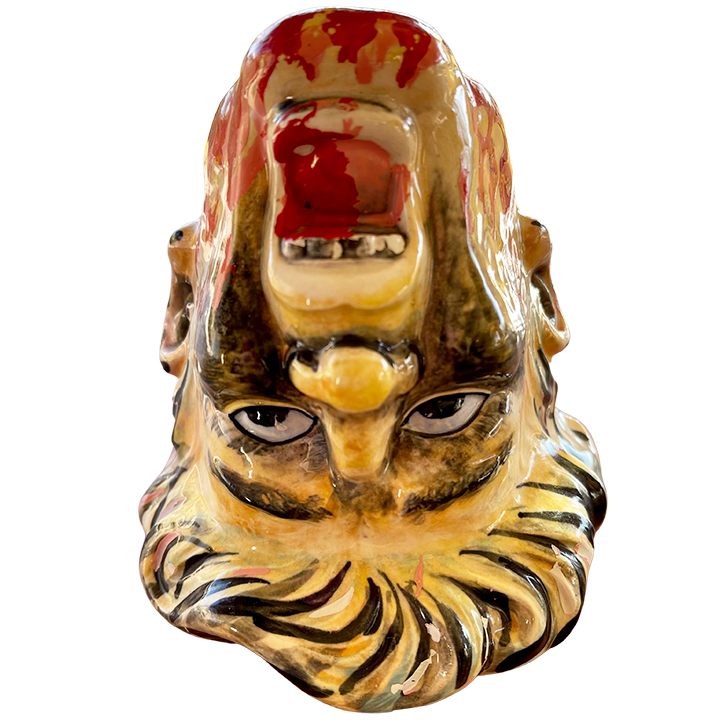 Ren Clark was a popular magician in the 1950s. His act took up residence at the Western Hills Hotel in Fort Worth, Texas, in an establishment named Ren Clark’s Polynesian Village. The restaurant featured elaborate Polynesian-inspired decorations, including bamboo, peacock chairs, and floats.

Those who witnessed Ren Clark’s magic show firsthand could take home Ren Clark’s Severed Head cocktail mug as a memento. The souvenir was a grotesque embodiment of one of Ren’s signature acts. It depicted an upside-down head with open eyes and blood dripping from its neck injury. The drink opening is the head’s neck. It is marked on the bottom “Ren Clark’s Polynesian Village” and features a multicolored glaze of beige, black, white, pink, and red details. The glaze was quite elaborate in its day, and remains impressive today.

Like many other famous ceramic mugs of historical significance, the Ren Clark Severed Head was manufactured by Otagiri Mercantile Company in Japan. More commonly known as OMC, the Otagiri Manufacturing Company stopped producing these mugs years ago and sold to Enesco Corporation.

Unfortunately the Western Hills Hotel burned down in 1969, but the legacy of Ren Clark’s Severed Head has endured. The mug has been imitated dozens of times by various artists, and its legacy will likely continue to be a source of inspiration for decades to come.

These ceramic cocktail mugs are related to the original Ren Clark Severed Head: