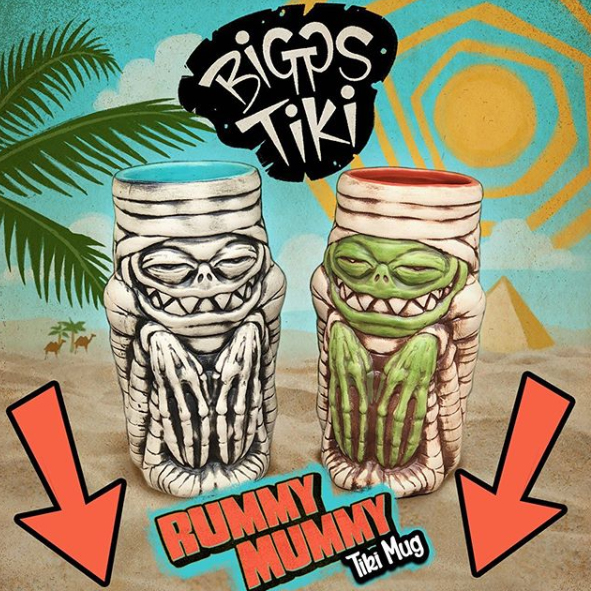 The mug depicts a smug mummy covered in burial wrappings with elongated fingers (like Nosferatu) and triangular teeth. It appears to come in two glazes- a bone white glaze with a teal interior and a tan/green glaze with a red interior.

The kickstarter campaign will feature a clever video describing the tiki mug as “dying of thirst [and] brought back to live, party, and drink!” If you’re anxious, you can watch the video ahead of time via the @biggsstudio Instagram.

We’re big fans of House of Tabu’s Nefertiki and Tut, Tut, Drink Up mugs, and we’re excited to see some other Egyptian-inspired tiki mugs being released. Will you be adding a Rummy Mummy to your collection?

Gabe got bit by the tiki bug while visiting Trader Sam's in Anaheim, CA. He founded The Search for Tiki LLC and built this website, despite the best efforts of his two cats.
All Posts »
PrevPreviousTwo New Glazes for Haunted Spirits
NextTribal Tumbler by OakwashNext